Its day 3 at the Old Mutual Joberg2c and we are now well and truly into the race. We have traversed the flatlands of the Free State and make our way off the escarpment into Kwa-Zulu Natal tomorrow. I’m looking forward to the awesome trails that await us.

The racing has had a different dynamic to it with the GPS navigation. With stage 2 being the first day of racing with the GPS’s it was more conservative than usual, and a big group remained intact until some 20km to go where the racing heated up. One or two navigational errors in the front group forced some teams to chase back on late in the race; whilst the gaps were only 20-30 metres, closing them in the final kilometres in the race can hurt. We managed to get 4th on the stage in a 5 team sprint, a result we were happy with.

As we became more accustomed to the GPS’s the racing returned to a more ‘normal’ structure today. Again it got hard later on in the stage with just 6 teams still in contention. Hanco and I under the Karan Beef banner along with EAI Cycling, Cannondale/Blend, Fedgroup Itec, Contego and Europcar all represented in the front.

We lost the group as we needed to stop for liquids at the last water point, but thanks to some powerful efforts from my team mate we fought our way back to 3rd on the stage and on the GC. EAI Cycling and Cannondale Blend are tied on exactly the same time at the head of affairs. It was awesome to be on the podium and we will be eagerly defending our position in the coming days.

Being back in KZN tomorrow will be a home coming of sort, it’s where I was brought up and learnt to love the awesome sport that mountain biking is. 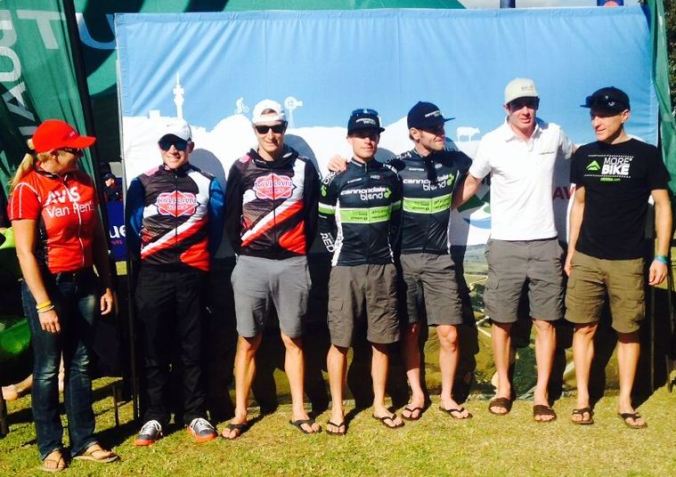