The drive up to Mpumalanga this past weekend had me reminiscing once again. I can’t believe it has been almost 8 years since I last raced in the region, as a junior in the SA National XCO Cup in Sabie.

This time however we would be bound for Mankele, just outside Nelspruit for the Isuzu 3 Towers mountain bike stage race, aka crash course in learning to ride fat knobblied wheels again with the Bridge Cape Pioneer Trek now just around the corner!

The race derives its name from the fact that we would be ascending to a different tower, perched on top of a rather large mountain each day. But, what goes up must come down and thus we were rewarded with some fantastic downhills and kilometres of awesome single track! 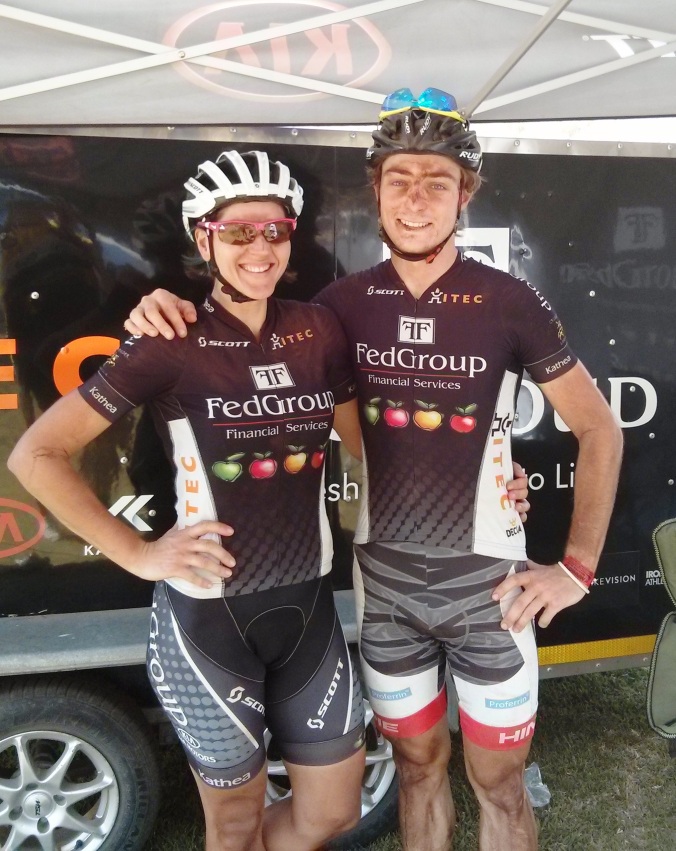 A bit more dirty than after the usual skinny wheel action.

I had once again joined the Fedgroup Itec stable for the weekend. Neil unfortunately was on his way home early, having come down with the flu so Konny, the Swiss import, fresh off the steel bird would be joining Brandon to head up the men’s team while Bridgette and I joined forces to be representing as the mixed team.

Brandon and Konny absolutely dominated the first two days of the race, winning both of the stages as well as the King of the Mountains they came into the final day with a handy 6 minute lead. The Privaateer team of James Reid and Brendan Davids stepped it up to win the final stage and secure 2nd overall on the GC with Brandon and Konny finishing the 3rd day in 3rd place to also win the race overall.

In the mixed race, Bridge and I faced stiff competition in the mighty mixed RECM pairing of Erik and Arianne Kleinhans. They managed to win the first two stages convincingly but we put up a good fight on the 3rd day even moving into the race lead. It was not to be though unfortunately with RECM storming by us in the final 10km to secure the stage and overall win. Bridge rallied the last downhill to try and peg them back but we were to finish second again, this time less than two minutes off the stage win and securing us 2nd on the GC.

It was not all over yet with stage 4 being the 8 hour car drive home which we nailed yesterday afternoon! At least it means that I can sip on a coffee at home this morning as opposed to the ‘other’ stage 4 which would result in me nursing a hangover perhaps…

All in all it was a great weekend in the Louwveld. Thanks to the Fedgroup Itec Team for having me once again. I’ll have to make sure I don’t take another 8 years to get up to the area for a race again!

Sharing the podium with the Kleinhanse.

I know I rambled on about the training in Joburg in my last post but it has really helped me put things in perspective.

I have over my cycling life lived in some awesome towns and cities in terms of the training they have been able to offer me. Don’t get me wrong that’s not all they had going for them, but yesterday while riding up to Nottingham road with Brandon I just realised, “Sh!t this is awesome!”.

The ride got me feeling nostalgic and I remembered the days as a junior when our rides in the holidays up to Notties and back would be our ‘long’ days, it was a good 4-4.5hour ride for us, it seemed to have a more sort of epic feel to it back then.

From Leuven in Belgium to Stellenbosch and Cape Town, to Greenville in the USA and back to Hilton where I am now, and where it all essentially started, all these places have had some great training routes and I appreciate them now more than I used to.

Another important thing about training routes is coffee shops… Recovery spins sometimes need a bit of extra motivation and yesterday we frequented a coffee shop I haven’t been to before, Babz, and had the most amazing chocolate brownie… I am considering riding all the way back up there today for another one…

I can’t slate the Cradle in entirety, although draining, it did provide me with a good safe spot to log in some miles over the last month and I’m grateful for that. I had a constantly stressing Mom in Hilton and girlfriend in Cape Town who I had to regularly re-assure that I was fine!

That’s all for now folks. I have a mountain bike waiting to be picked up, and I am more excited than I thought I would be to hit the dirt! Thanks to Brandon for lending me his sweet Scott machine! I need to hit those Hilton trails and salvage whatever technical skills I may have left in preparation for my first mountain bike race since November last year… This should be interesting.

Who knows, maybe a season on the road will slide things on the mountain bike more into perspective for me.