Joliviet Farm at the end of a tough stage.

Looking back on a week of racing through our beautiful country there are many memories. Although different race villages, terrain and the days are essentially blurred into each other now, I still think of snippets here and there and am reminded of something which puts a smile on my face.

The Ginger Ninja, AKA Hanco Kachelhoffer and I teamed up for the 9 day race under the Karan Beef banner. Fittingly the Ginger Ninja owns a red car, and this towed our home for the week, our off-road caravan. We weren’t going to be rolling with the plebs in tents this time!

One of the first highlights of the week that come to mind is certainly our two stage podiums. The first came on the 4th day of the race. We were in 5th place with the Fedgroup Itec Connect team with some 20km to go, passed them 5km later and with the Ginger Express firing on all cylinders ‘all I had to do’ was sit Hanco’s wheel. A further few clicks down the road, we caught and passed a flailing Contego team. The last 8km drag on the mighty Sterkfontein dam wall, with a strong cross wind saw me deep, deep in the pain cave. I was fixated on my Garmin, begging the kilometres to finish quicker. We made it and enjoyed our first podium.

Our second podium came in a similar manner. The 6th day and the queen stage of the race would see us leave Kamberg traversing the foothills of the Drakensberg to Underberg, (read alpine passes) which saw us summiting the first major climb in 4th place. We kept the tempo high, caught and passed Contego over the top of the second major climb, and kept the pressure on to take a second podium behind the Cannondale Blend and EAI teams. We had also taken a significant chunk of time out of Fedgroup and moved back into 3rd on the overall GC.

All aboard the Ginger Express

Being charged by rhinos

Five days into the race, a supposedly easier day we were thrown a major curve ball. Hanco cut a sidewall in the first 5km of the race. What resulted was a 40km time trial to get back to the front of the race. With the Ginger Express on full throttle we did make it back, after being held up in the traffic of other riders and a herd of cattle in the single track.

Now back in the front group we entered the Zulu Waters Game Reserve and would encounter further traffic from the vast amount of game. I spotted a lone Wildebeest running through the veld and shortly thereafter the front group had to slow as two Blesbok came hurtling across our path. Now Blesbok are not the biggest of antelope but nothing could prepare us for what happened next.

With the front group in a long line as we rode single track through the bush we saw 3 rhino! Two large adults and their young one, the young rhino seemed to be interested in us and started running towards us, uh oh not a good idea. Mom and Dad wanted to protect the young rhino from us seemingly dangerous cyclists and this resulted in them charging towards us at a fairly rapid rate. I was 4th last wheel in the group and after our huge effort to get back I was not losing it, I put in a big effort to edge out the rhinos and hold my space. The last 3 riders thought it would be safer to slow down and let the rhinos do their thing. It was an exhilarating experience.

Something which the race organisers have done that I really enjoyed was involving the communities in each of the race villages. To the extent that each community will essentially run their race village in terms of catering and other services with the personal touch. Each community can use their own initiative as to what these other services may be. At times it was as simple as helping riders take their bags to theirs tents as they finished the stage(no easy feat after a 5 hour day on the bike), to some of the most amazing sweety tables, with cakes bearing life like resemblances of the race villages. Along with encountering such polite children from each of the schools involved, each village was special in its own unique way. These are major fund raising events for each of the towns and we certainly were looked after by warm welcoming people from many different walks of life. 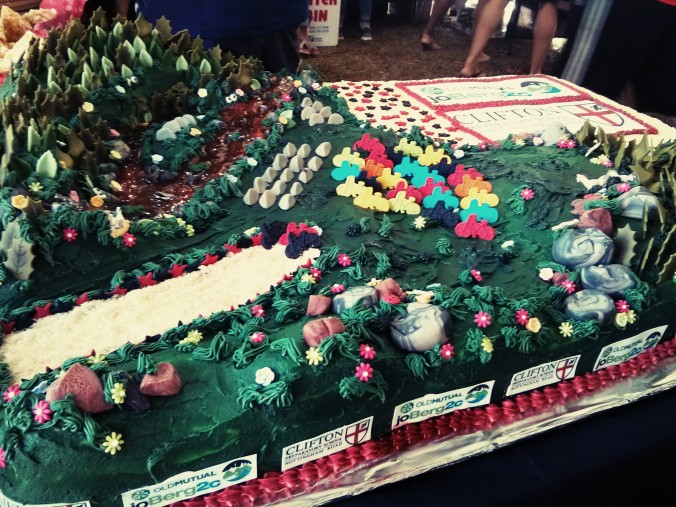 Various organisations were also involved with the water points, which I could unfortunately not enjoy as freely as I did on the first day in ‘Koeksister Strategy’ but I do believe they each tried to outdo one another, nothing wrong with a bit of healthy competition.

Off the bike we had an awesome vibe in our Team Karan Beef caravan. Our generator sounded like a PW50 going at full throttle every time we fired up the coffee machine, much to the amusement of our fellow ‘high class’ campers. With a couple of the other teams also hanging out with us, many laughs were shared and I made some new great friends. The mountain biking community interaction with one another is in this sense awesome.

Sheldon, AKA the Hobbit did a great job as our mechie/soigney and worked tirelessly throughout the week, his efforts were appreciated by us immensely. Once again we entrusted the body panel beating service to Megan and her REST crew. They were awesome and kept us in check, day in and day out, as our bodies took a pounding from the rough relentless terrain. Essentially these behind the scenes staff as well as the race staff form the ‘race caravan’, so named as they all move from one race village to the next in a long caravan, bringing with them the necessary support structures that we so heavily rely on each day. The race caravan is essentially the back bone of the race in so many ways, from a cold Aquelle water at the finish line, to a steaming Seattle coffee in the mornings. They afforded us many luxuries out in the sticks.

Last but certainly not least, Karan beef afforded us the opportunity to race under their banner for the week and I believe we did them proud. Karan Beef not only sponsored our team and one of the Masters team but also supplied meat for various race villages. From a hearty oxtail to a delicious rump steak, they ensured our nutritional needs were met along the race.

Sponsor wise, keep in touch for some exciting announcements for Hanco and I going forward!

I’m sure as I experience certain things in the days and weeks to come I will be reminded of further memories that we were so fortunate to enjoy last week. The Old Mutual Joberg2c is a special race and it was great to be involved in it.

Family Affair with my Dad at the finish line at Mackenzie Club.

My Grandpa came down to the finish line in Scottborough.