When the times are good, it’s hard to say no. Soon thereafter I headed off to Wellington, the home of Imbuko Wines and the host to the Gravel Travel Classic on the famed Welvenpas trails. A young Steph Senekal showed off his XCO prowess and held off an established name, Lourens Luus and myself to take the win on the day. It was a good hard burn coupled with great trails and was my last outing on South African soil before I headed off to Mauritius.

I had visited Maurtius before, but never to race and was thus unsure of what to expect. Who would be my competition, what would the weather be like and what riding conditions would we encounter. Well the Island threw a curve ball on the first stage as we encountered monsoon like rain, wind and mud. When it rains it pours? Yes. After missing a turn 10km into the stage, Matthieu Desserprit from Reunion and myself found ourselves on the back foot so to speak and we were a good 10 minutes behind the front of the race. The weather conditions made it tough, but I took solace in the fact that it would be the same for all, and then I punctured. Ultimately a long day out and it would be difficult to erase the 10 minute deficit on the line over the next 2 days and 3 stages.

Matthieu took out a flat and fast second stage whilst I then won the night XCO race, in both circumstances time gaps were a matter of seconds to Mauritian champ and overall leader Yanick Lincoln who had won the first stage. The final stage and day proved tougher and Lincoln got away from Matthieu and I, up a rocky loose climb. Ultimately I would finish second on the day and second overall behind Lincoln with young junior Alex Mayer taking third. All in all a great experience and I can’t thank Beachcomber Tours enough for having me.

It was back home for two weeks and some R&R. With so much racing on the go, training does tend to take a bit of a back seat and comprises of mostly recovery rides to try and recoup some freshness and spring before the next effort.

The next effort would come in the form of the PWC Great Zuurberg Trek just outside PE. I had again partnered with young Dylan Rebello and after some initial drama early on, we managed to take out the first stage ahead of a charging Adriaan Louw and Andrew Hill.

The second stage would be one to forget as a cracked rim and collapsed wheel would ultimately see us loose a huge chunk of time, to a strong Louw and Hill who would take the stage and a commanding race lead.

The final stage offered some redemption as we managed a 3rd on the day with the Kargo Pro team of Jurgens Uys and Marco Joubert also getting involved in the action, taking a stage win with Louw and Hill winning the overall title. 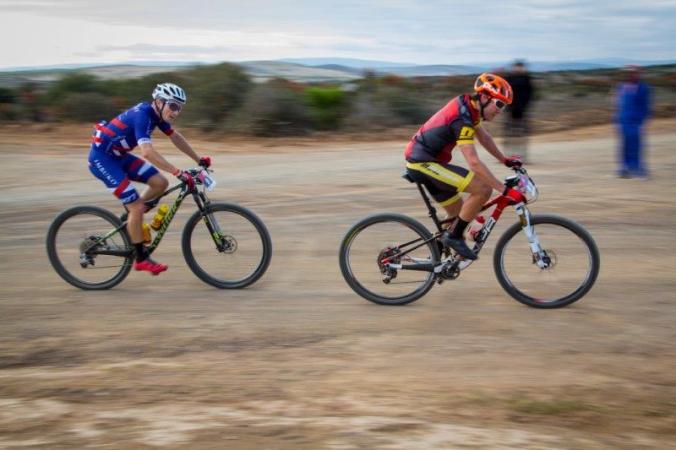 From PE it was straight up to the big smoke. I have in the past needed a few days to acclimatise to altitude. Normally 3 days works well for me, which is opposed to the conventional wisdom. The next round of the Asburton National Series would take place at Van Gaalens, a venue and area I was not totally unfamiliar with. As we rode, certain trails sparked memories, but really my body was in a one speed day and there were no sparks. It wasn’t a particularly fast one speed day and try as I might I couldn’t shake out of it.

I had taken it one race too far. It was time to head back to Cape Town for some time out. Reflecting on a busy few weeks, you can see from the above words and images that there were many good times had. So really, I can’t complain. Like I said earlier, when the going is good, it’s hard to say no. When the form is there, the natural inclination is to want to carry it on for as long as the body and mind allow.

Now after some time off, I feel like I am ready to go again. To get back into the swing of things a couple of unstructured rides, that are really just rides are always good. Rides just to enjoy being on the bike again without looking at power or heart rate readings. Of course the serious business will start again soon, but for now it’s just plain and simple bike riding time.

After a whirlwind two months of racing and travelling all over the country and even abroad, its time for some rest. Time to look back and see what was done right, and what can be done better next time around.

The rest is welcomed and I could feel towards the end of this racing block, I had perhaps gone one race too far at Van Gaalens. It is important to push the boundaries though, otherwise we would not know where they stand.

The rest is is followed by a period of planning and rebuilding. The focus for the latter part of the season will be towards the Cape Pioneer and Wines2Whales, both big races and it’s exciting that they again form a part of the race calender.

Before moving forward, as I said, it is important to reflect on what has been a successful racing stint. After a week long race like the Epic, I’ve found that from past experience I can either come off the race very well, into an almost second higher peak or be crawling, there is no middle ground. The later more the case after the Cape Pioneer last year and the first probably how I came off the Cape Pioneer in 2014. The most important factor is to first ensure some good recovery time and then in these cases a few short sharp tune up rides before the Wines2whales.

Following the Epic this year I had some good rest, indulged in some food and wine and then was mentally and physically ready to go again. The first outing would be a short and exceptionally intense effort at the 99er Classic, a 45km race in and around the Tygerberg network of trails. I was happy with a 3rd on the day behind the USN duo of Waylon Woolcock and Darren Lill.

Rounding out the podium at the 99er Classic.

In action at the Liberty Cape Winelands Encounter.

The following week Craig and I again teamed up to take on the Liberty Cape Winelands Encounter. Although there were a few minor issues on the first stage, they were just a minor dent into our efforts and we again combined well to win 3 of 3 stages and the overall race. The mojo was good and I was keen to carry it moving forward.

After a criterium at Killarny, I lined up for probably my longest one day race ever, the Transkaroo. A 240km marathon which would prove to be a sharp contrast to Killarney. Nonetheless the good mojo continued and the race would ultimately prove to be a battle of attrition. I made my move up the Ouberg pass and opened a gap of a few minutes as I crested the climb and the escarpment. A final top up at the last tech zone would be my sustenance until the finish line another 40km later. After riding from sunrise to sunset I had managed to bag the win. Good times indeed.

Lonely road up the Ouberg Pass.

It’s steep and it hurts.

Power to beat your best, you’re stronger than you think.

With just a few short days for recovery it was back on the road again, this time to the Gravel and Grape. I would form a new partnership with Dylan Rebello, as Craig was unable to get leave for the race. Our new relationship got off on the right foot and we managed to take the first stage, and then the second and finally the third and overall title. Winning had become a very good habit. 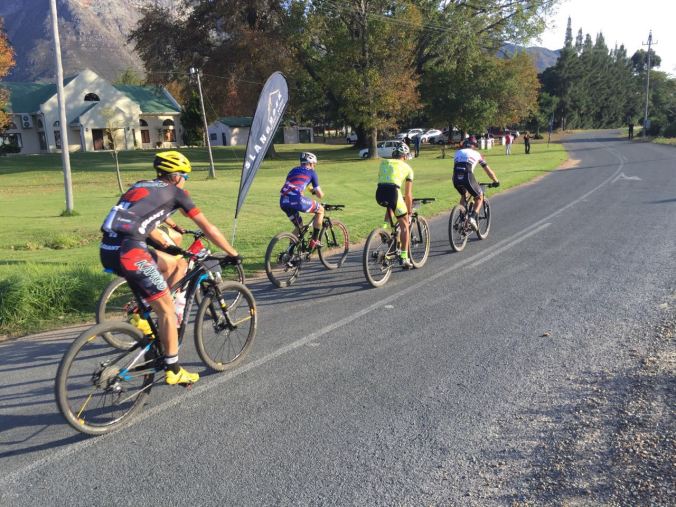