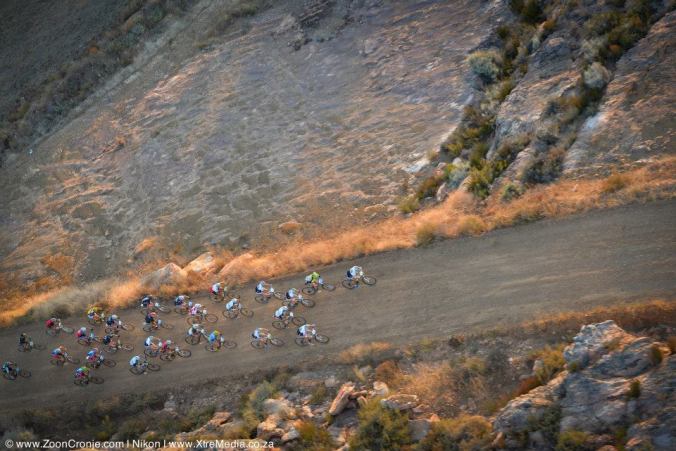 The lead bunch in the morning light.

Day one of the Dutoit Tankwa Trek certainly marked the running of the Bulls. A full squad of the German team arrived on the start grid and took matters into their own hands from the gun, controlling the race and keeping the speed high.

This translated into putting me in the hurt box and keeping me there for quite some time. Visions of myself sitting in the leading bunch, watching the big boy’s trade punches, ended just under an hour into the four hour stage for me. The lights were on but no one was home today. Essentially, it ended up being a good hard slog through the Koue Bokkeveld. It was however made more pleasurable aboard my new beast, the Merida Big 99 Team issue bike and when the opportunity arose I took in the beauty of the surroundings.

Nonetheless, it is fantastic to be back at a Dryland event and be looked after so well. The dining at these races is on another level to their competitors and with hard days of back to back racing I am taking full advantage of this. This is just one aspect of where Dryland have got it right, attention to detail and looking after their customers, the riders, ensures that their repeat business is exceptionally high.

One must also consider that this race is only in its second year and having gone from less than 100 riders last year to selling out at 350 riders this year it is phenomenal. Growth has not only been number wise but the quality of the field has improved drastically too. As I mentioned the Bulls arrived with a full squad of some 6 riders competing in an assortment of teams and individuals. BMC’s Ralph Naef teamed up with Martin Gujan and the Euro-African partnerships comprised of Konny Looser together with Adriaan Louw and Erik Kleinhans teaming up with Frantisek Rabon under the RECM-Specialized banner. The South African contingent certainly came to the party too with a full squad from the Cannondale Blend team, Charles Keey and Darren Lill riding as a team and Waylon Woolcock solo. Reid and Davids joined forces under the Trek-Privateer banner. The solo category was bolstered with Cape locals Jurgens Uys and Oli Munnik. As you can see I could go on and on…

The bulls took top honours in both the teams and solo categories with Trek-Privateer the second team and the podium rounded out by the Cannondale Blend duo. I mustered up a 7th in the solo cat, a couple more minutes down than I would have liked to be.

Time to put the legs up, reload the engine and tomorrow we try again. Another running of the bulls or will we see another pairing step up and take the role of the matador? Time can only tell.