I rode my first Cape Epic in 2010 with less than 12 hours’ notice and a man I met on the morning of the race (I’m pleased to say we’re still good friends). I’ll be riding my 3rd Cape Epic this year, with a bit more notice, 5 days to be exact. You can organise a lot more in 5 days than 12 hours…

As I said I’ve received a last minute invite to ride the ABSA Cape Epic with a good friend of mine, Simon Swemmer under the Swift Carbon Racing banner. Simon’s original partner Mark was forced to pull out of the race and Simon had me on standby, and just like that I was super subbed in.

Simon is at first noticeable for his giant calves, he could kick start a small plane with them. I use it as the reference point when explaining to people who my partner is: “Ya Simon, the guy with the huge calves” to a reply of “Oh ya him”. Although we have not ridden much together before, I am sure we are in for a fantastic week of racing. Simon will be held accountable for the rescheduling of my planned coffee rides next week, coffee shops are not frequent in the Klein Karoo you know. 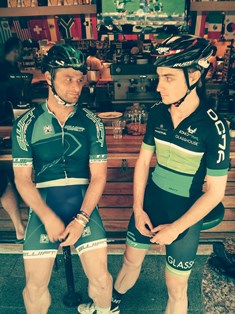 Simon and I had a serious team meeting at Giovanni’s, it didn’t last long…

I have also been very fortunate to receive some added support from:  Glasshouse Consulting and DC76 who have stepped in to help take care of the extra costs, of which there can be many at the Epic… I must also thank my personal sponsors here as they have also all contributed in their own way and have made my job easier next week allowing using some of the best equipment and nutrition out there. So a big thank you to: Merida Bikes, Continental Tyres, Enervit Nutrition, Nike Vision Eyewear, Squirt Chain Lube and Sludge Tyre sealant.

We kick our foray off tomorrow at Meerendal Wine Farm just outside Cape Town with a 23km prologue. A prologue is a short time trial which separates the teams into the different start batches for the first proper stage on Monday. An 11.31am start time gives you enough time to sleep off your hangover and still come cheer us on. We are the first of the UCI teams to start and thus according to the lady at registration are professionals, confirming what I have liked to believe all along. If you’re not in the vicinity I expect you to be glued to your television sets, SS6 is where all the action can be from 9.30am. You can also follow us via the Tracker app, our team number is 325, the links to this are on www.cape-epic.com

I’ll keep the blog updated, as and when I can summon the energy and internet connection next week.

The mood is light and jovial now, it may not be on Monday afternoon after the traditional b!tch that stage one of the Epic can be.