After a good 4-week break off the bike it’s back to the grindstone, so to speak. But not really actually, the break was a good one, perhaps I may have indulged a bit too much in the sausage rolls and peanut butter milkshakes but I do feel refreshed, motivated and ready to go again.

Now, with just over a week of riding in the legs again I am getting back into the swing of things. It may sound weird but I missed the feeling of coming home with tired, sore legs. It’s quite satisfying in a way. The first few weeks of riding is just to get some fitness back, no worrying about what power I’m putting out but rather leaving the Garmin at home and just having fun.

It is also great to be back on the Cape Town roads and trails with my friends again. Racking up the miles and frequenting our old coffee stops, good times!

Speaking of trails, whilst nothing is final just yet it looks like I may be making a return to them for the 2014 season. Unfortunately with no viable deal for me in USA next year I will return to mountain bike racing on home soil. I explored options in Europe too but our green South African visas can make it tough to do a full season there without being on at least a pro continental team. It left me in a sort of catch-22 spot.

I think South African mountain biking is in a very healthy spot at the moment, particularly on the marathon side of things so I feel my decision will be a good one. Hopefully negotiations over the past few weeks prove to be fruitful and I’ll have some new partners on board to assist me in these endeavours. Speaking of which, if you have a couple of ZARS lying around and want to sponsor a mountain bike team, hit me up!

I’ll try keep these posts coming more frequently now that I am back into the routine again. It has been great to find out over the last few weeks that I have a few ‘fans’ who read them too. So it’s not just my Mom hitting refresh on her browser that’s racking up the hits. Thanks for the support.

Till next time then, I’m cutting down on those sausage rolls and peanut butter milkshakes but the new McFlurry Mudpie Delight is proving to be a tough one! 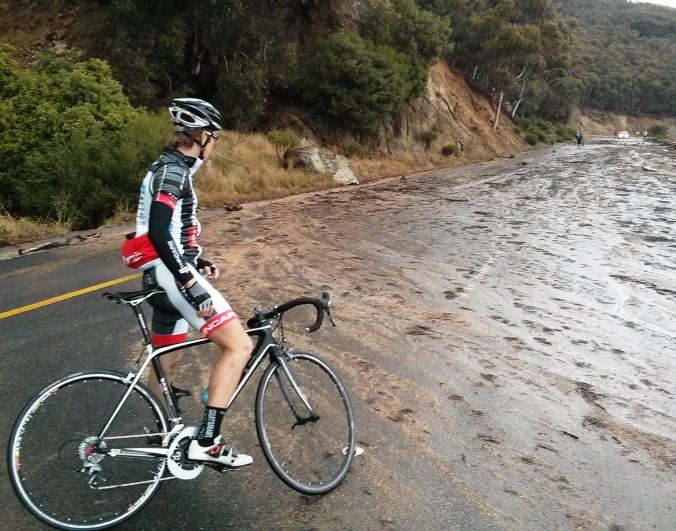 The first training ride back in Cape Town after the off season proved to be an interesting one, it was the day following the big storms the evening before, and Charles and I encountered sections of washed away road and a mudslide which was ankle deep on the Llandudno road for over 50m!