The day has finally arrived!

It all came about on a training ride one morning. Oli Munnik mentioned the idea of riding the Cape Pioneer together and after some consideration we were in.

Yesterday we made the trek down from Cape Town to the bustling Karoo town of Oudtshoorn. The trip was entertaining to say the least with DJ Haselbacher on the decks and former race car driver, Nizaam at the wheel. They will be teaming up this week to form the second Asrin Cycling Team.

This morning Oli and I went for a quick burn around the prologue route. To say it was rad would be an understatement. The kilometres of flowing, loose, rocky single track are unbelievable and the best part is that we get to ride it again this afternoon! 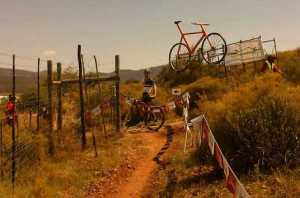 We’ll be on the starting grid at 14:41 to take on the 16km prologue. A shorter stage, but a tough 6 days still awaits us starting tomorrow. That doesn’t matter though because “honey badger don’t give a sh!t” and that’s the mentality we’ll have to adopt for this tough week in the Karoo.

Here’s to a bad ass race!