Finally it feels as though things are starting to click into gear racing wise for 2012. I’ve been hitting good numbers on the power meter in training but feel this hasn’t reflected in my racing this year thus far.

This past weekend it was back down to KZN for the Momentum Health UCI XCO International on Saturday and then a spot of road racing at the Battery Centre Midmar Nott’s on Sunday, one of the first road races I ever did as a junior.

The Momentum XC race was held at Giba Gorge on the outskirts of Durban. It’s a venue I am familiar with having raced and trained there before. The course set out for us was some 5.3km long with approximately 150m of ascent a lap. Course designer Nic Floros had once again outdone himself and set out a lap consisting of well-manicured open single track, a few rock gardens and some tricky switchback climbs. I spent two days getting to know the course, one of them with Andrew Warr who is a local in the area and he showed me a couple of cool lines.

Fighting through the mud. 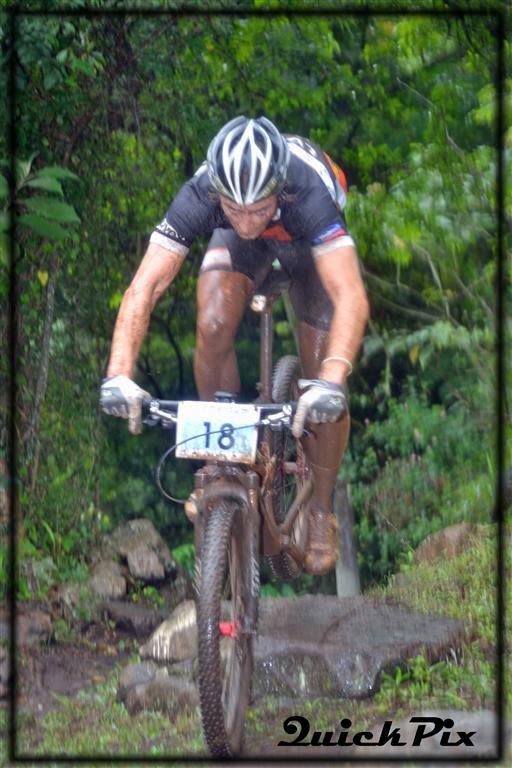 Popping through one of the rock gardens.

Come race day things were a bit different with Giba having had overnight rain and rain on the start line. I managed to get off the line well, something I learnt in Belgium, and held my own until slowly backing off into a pace which was more comfortable for me. It resulted in a few lost positions on the first lap but this was not a one lap affair.

Through laps two and three I found a good rhythm and slowly caught and passed: Jedson Tooms, Stuart Marais and finally Paul Beales (Orange Monkey Cannondale). From there on to the end I battled through the race on my own.

Pushing down one of the single tracks after just passing Paul Beales.

The rain did stop for the last few laps but contrary to what one might think this actually made conditions worse as the mud became even stickier. I soldiered on to the end and finished 13th in the Pro Elite group and 5th in the Elite Category which I’m quite happy with. It presents a good platform for me to work off.

Following the race I needed to do whatever possible to recover as best as possible for the road race the next day. I guzzled down some PVM Re-Ignite and a Sesame Chicken and Avo Wrap from Dulce Café! Go try one, they’re amazing!

Race video, I get my few seconds of glory 34 seconds in, you may not recognise the muddy kit.

A big thank you to my Mom and Dad who were my back up crew on the day, to Frosty for lending me a rear wheel and all my friends on the course for all your support.

The next morning I had to wake up bright and early and get to Midmar dam for the Battery Centre Midmar Notts road race. I had a good warm up and was feeling ready to attack and pace whenever possible and ride myself into the ground! It was good to see some competition on the line from fellow mountain biker Rourke Croeser (Orange Monkey Cannondale) and Brad Stroberg had brought down team mates from his CSA Toyota U23 team

This hard efforts started soon into the race as I countered the first move of the day and went solo off the front. No-one seemed to be interested in coming across to me and I was swallowed up by the bunch on the base of the Happy Hill climb. The pace wasn’t particularly hard on the climb and no moves seemed to really stick until Louis Mentis (CSA Toyota) went off the front with two other riders and was later joined by his team mate Kallen Watson. They dropped their breakaway compatriots and then it was up to the non-represented teams in the drastically reduced main bunch of some 15 riders to chase them back.

Rourke and I along with a Fego Café/Lassen and Mr Price rider tried to get the chase organised. We seemed to be starting to make inroads when the commissure called the race off. Unbeknown to us there had been an accident on the way out when Trevor from Cycle Lab in Pietermaritzburg was hit by a taxi. It was a huge shock to us but I hear Trevor is now stable and should make a good recovery. Please keep him in your thoughts through this difficult time.

All in all a good weekend’s racing for me. I am now in Johannesburg for the Bridgestone Route 69 three day stage race this weekend where Sean and I will be racing to defend the title we won last year.