Hi Everyone, firstly I must apologize for the lack of blogging overt the last two weeks. A spit coffee incident has brought an abrupt end to the life of my lap top. I have typed a few blogs on my Blackberry but having trouble posting them. It is now my last week in Belgium and I will line up for 3 races: the Overijse Kermesse tomorrow, Flanders Cup XC on Sunday and another kermesse on Tuesday.

Keerbergen is where I lined up for my second Kermesse in Belgium.

In all honesty it felt like my first real introduction to Belgium Kermesse racing, it was hard!We would do eighteen laps of about a 6.5km circuit. It was once again pan flat but had many corners, a few chicanes and interestingly placed speed bumps.
It rained a bit as we started and the bunch took the first corners rather tentatively. It soon started to dry up after about five laps and things heated up some more. It’s tough to judge which move will stick as there are just attacks after attacks. Eventually one went of about 15 guys that stuck. Why that one went and the four before it didn’t is a mystery…
The teams don’t appear to work together; it’s more everyman for himself. The chasing bunch would work together for a lap or two, bring the gap down to 30 seconds and then a few heroes would attack and try bridge on their own. This would disrupt the chase and the gap would go out to a minute again.
This process was repeated a few times until, with about 4 laps to go, I was quite certain it would not come back together. Things started to get really tough in the bunch then. Attacks just kept going and it was hard to maintain my position in the top 20 guys. I was following the moves though, and happy to be able to do so.
It started raining again in the last two laps, this required further concentration as we had to carefully inch our way around the corners. I finished about 15th in the sprint in our bunch and 30th overall. A fairly decent result and I am quite happy with how I rode through the race. I’m still getting used to the many accelerations and I could feel the legs getting a bit tight towards the end. I’m sure the problem will sort itself out in the next few races.
Unfortunately I haven’t been able to find any photos from the race yet so feast your eyes on the new addition to the family, my Cube Litening Super HPC Pro. I am loving the bike and its responsiveness. The frame is so stiff which is perfect for the Belgian style of Kermesse racing with many accelerations. 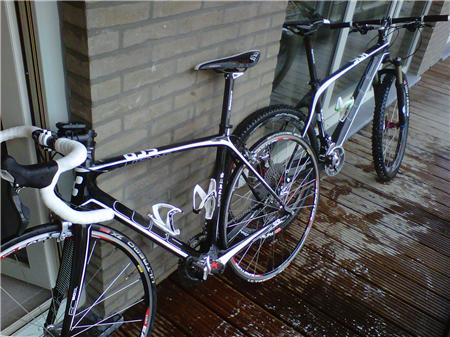