When I told my parents over the phone last week that I was doing a criterium on Friday night called: Friday Night Fights it sounded pretty bad ass, like I was going to a boxing match, let alone a bike race! ‘Skinny, leg shaven, lycra clad cyclists’ and ‘Friday Night Fights’ are not two terms that you would often hear in one sentence, yet it all happened in downtown Gaffney last Friday night.

Come to think of it, cyclists are actually pretty hardcore!

The race was an aggressive one and that was perfect as I was using the race as training for the upcoming Tulsa Tough this weekend. Tulsa will present us with 3 days of NCC level crits (AKA racing with the big boys) and ends off this coming Sunday racing on a course with a climb in it called: Cry Baby Hill. Pretty intimidating so I wanted to make sure I was ready!

Anyway, back to Friday Night Fights. The drag up the home stretch made matters hard which I liked. The run in to the finish was a lot about positioning or rather whoever had the biggest balls going into turn 3, off the downhill section of the course. From there it was a kick to the line, I came from pretty deep, from 4th place in last corner, and felt I kicked well to take 2nd on the evening. Ben Renkema (Global Bike) took the win and was just a bit too far ahead for me. Junior Mint also had a good evening of racing taking the Gamblers Prime (a prime on the second last lap of the race).

I was stoked to finally get on another podium; it really has been a while since my first race in the States. A couple of top ten’s along the way have been solid but I still aspire to go one better and the drive to that is deeply motivated at the moment. 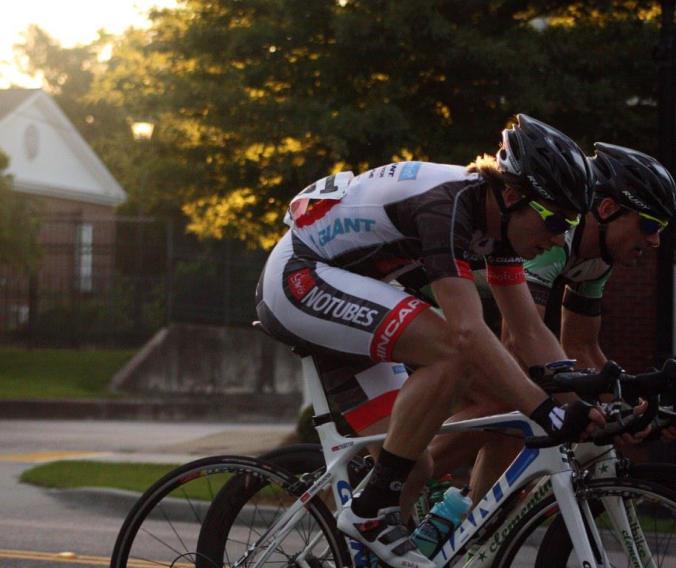 With another race in the legs we were back in the car and on our way to Cheraw on Saturday for the Jazz Criterium. At least we were on our way to Cheraw after I double checked the race flyer on Saturday Afternoon, an hour before our planned 2 hour drive to Columbia. We had got the wrong address and after realising that we now had a 3hr drive, the car was packed in ten minutes and we were on our way. The trusty Garmin said we would arrive at 6.22pm, a good 38 minutes before our start, it would be tight…

The race to the race was going just fine until we encountered traffic as the result of a motor car accident while going past Charlotte. As we sat in bumper to bumper traffic inching forward our arrival time went up minute by minute… Fortunately, we eventually got past the accident and were on our way again. Parker had managed to register for us and had our numbers, the question was would we still make it on time.

6.46pm drive into race parking lot, jump out car, put on kit, get bikes and bottles, find Parkers car and pin up! We even had 5 minutes to get in a quick warm up in! No stress!

We were racing another 4 corner crit course although tonight would be pan flat. With a lot of attacks the speed was high, but the right combination was not forming and hence nothing would stick. As the peloton realised this, a sort of stale mate was reached as guys started thinking about the sprint.

Coming into the last laps, I found Junior Mint’s wheel and we held positioning well at the head of affairs. The run in was looking good and I was motivated to go one better than the previous night, until Junior Mint came crashing down on the first corner of the last lap.

Somehow, once again I just managed to squeeze past and not go down, but had to kick hard to get back into the front mix. I managed to get onto 6th wheel into the last corner but it was too far back to get where I wanted to be and had to settle for 5th on the evening.

All in all it was a good weekend of bike racing. I’m looking forward to Tulsa Tough this weekend and hoping I can carry some of this form through there. Check out info on the race here, hopefully I’ll have something bad ass to report on, from what I’ve heard I will!