I was back on the road again last weekend, this time with the vehicle pointed in the direction of the coastal town, Knysna, and with Hasi at the wheel. Reason to be concerned? Not really, although there were a few speeding fines. He does blame this on my inability to point them out to him in time.

Asrin would have four teams taking part in the RECM Garden Route 200 3 day stage race. The race was unique in that there would be a different start venue but with the same finish venue each day. Tapa’s restaurant on Thesen Island would be the finish and it was a pretty cool race village with a somewhat European stage race feel to it.

The first stage would be one of the tougher ones with 67km and almost 1500m of vertical ascent before us. We started at the Knysna Elephant Park which provided my Austrian friends, aka ‘the tourists’ with much enjoyment. The weather was playing its part but as we found out later on in the day it hadn’t in the weeks before and the forest was a mud bath in areas. I was struggling with some stomach issues coming into the race and when the gas was turned on I couldn’t do much more than watch as the other teams rode away from us some 15km into the stage. Hasi and I took the stage rather conservatively hoping that I would be on it for stage two. We rolled over in a respectable 3rd position in the team competition.

Ishmail protecting our nervous tourists from the ‘big bad elly’

Getting ready for the start.

I woke up feeling considerably better on Saturday morning and managed to eat a bit more than what I had yesterday. We started off conservatively again and found ourselves with the Rocky Mountain pair of Cooper and Hayley up the main berg of the day. I was feeling great and over the top we managed to drop the pair. We kept the gas on as we started the descent and opened the gap a bit. This is when amateur hour started. In the excitement of feeling better and duelling the Rocky Mountain pair I hadn’t eaten much, in addition to me eating less than half of what I usually do my sugar low was met with low reserves and KAABOOOM I blew.. very badly. I think Hasi thought we were on a Sunday morning coffee ride as I struggled through to the finish. We held onto 3rd team but lost massive chunks of time. The unfortunate thing about feeling the way I did was that I was not able to take full advantage of the magnificent buffet spread put on by Tapa’s restaurant every lunch and dinner, I may have come home having put on a good few kilos!

I again woke up feeling better and wanted to make amends for a poor showing through the first two days. Within minutes of starting the stage I started guzzling down anything and everything I had stuffed into my pockets. Bear Grylls once said the key to survival is ‘if you see a kilojoule, eat it’. This I almost did, bar stopping for a squashed beetle track side. Unfortunately for the Rocky Mountain pair they had tyre troubles early on into the stage. We hung in with the lead group being driven by the Contego pair of Bressler and Venter for a bit longer than previous days. I wasn’t amazing but better. We did have a chain problem when I bent a link but we managed to sort this out with a new one and we were on our way again, clawing our way through the teams who had passed us. Fortunately today Eskom didn’t cut the power short and we managed to finish a more respectable second team behind the Contego boys. We had made some time back on Rocky Mountain but not enough for second overall.

It was a good showing for the other Asrin boys as we placed 3 teams in the Top 10, with Nizaam and Ludi finishing in 6th place and Ishmail and Phillips in 8th. If there was a ‘team’ team prize we could have one that perhaps? 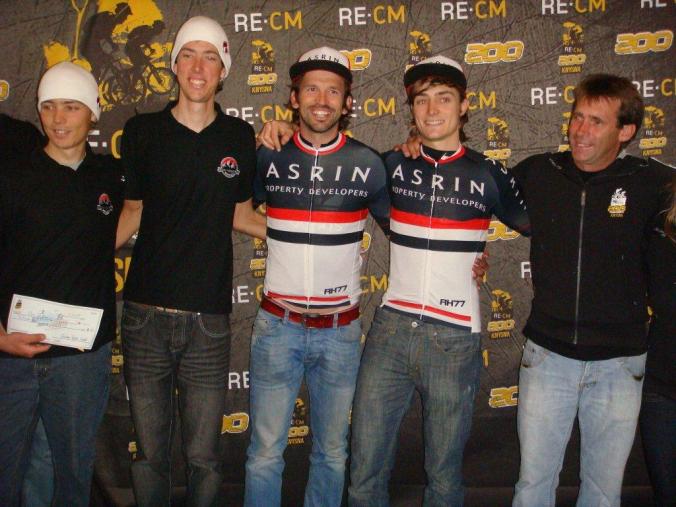 Once again a big thank you to Asrin for the opportunity to go and do the race, thanks Nizaam and Ishmail.

Thanks to my partner Hasi for being patient with me through the race.

Thank you to Louise and her Garden Route Events team for putting on a fantastic event and to RECM for backing it.