With the racing that took place this last weekend at Contermanskloof it seems that the popularity of the Olympic discipline of mountain biking is on the rise again in the Cape. What is particularly pleasing is the number of younger athletes taking part!

The course set out included two single track climbs with a few steep punchy sections thrown in through the vineyards for good measure and a long downhill single track with a few switch backs and a fun fast section down to the dam. There wasn’t anything particularly technical but as the course was ridden in more it became more fun. The Cape Winter was kind to us as we had sunny warm conditions on the day!

Personally it was my first XCO race in a while and with training having shifted focus somewhat I haven’t been working on my speed as much and I felt the effects of this. I anticipated the usual fast start with the likes of James Reid (360 Life) Dom Calitz (Protek) and a host of the usual cape mountain bikers in attendance and fast it was!

I managed to settle into a rhythm which I felt comfortable with and one which I could maintain through the race, I found a companion in Michael Casey from the Maties team and we spent most of the race together.

The more conservative start paid dividends as we started to real in guys who had started faster than us as the laps ticked by. Casey (an U23 rider) proved a bit too strong for me on the last lap as I started to cramp up a bit. I backed off a bit and rode in conservatively to the finish as I knew I was lying 1st in the Elite men’s race.

Accelerating out a corner.

Nizaam took part in his first XCO race ever and had a great day out finishing in a very solid 7th place in the competitive sub-vets category. 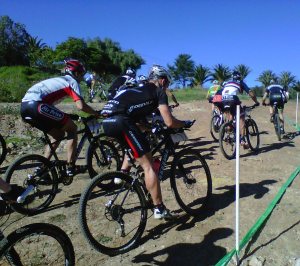 In the U23 race James took a convincing win with Dom in second and Craig Boyes (Daiken Gu) in 3rd. I managed to win the elite race with Grant Kruger in 2nd and an old Maties compatriot Willie ‘Big Blade’ Brink rounding out the podium.