After my initial set back training got well under way and I lined up on the tar for my first race of the season, the Bouckaert Soenen Aca Joe Pro Classic Series League race. The race would start and finish in Paarl whilst traversing some 125km through the Boland and over the Kasteelberg pass in Riebeck Kasteel.

I had decided to sit a bit more in than usual and save my legs for the end of the race and have a bit of a go at the sprint. All was going well until about 15km from the foot of the pass where I got a rear wheel puncture. Fortunately an old team of mine, Smith and Associate/ O-bike Maties, were kind enough to give me a wheel and I was easily able to re-join the race, thanks very much Andrew and Luke!

Going up the climb the race split up a bit but seeing as that the climb is so far from the finish the race joined up again as expected. From here on through the rolling hills of the Paardeberg circuit a move went off the front, in my opinion it did seem as though the bigger teams who weren’t represented left the chase a bit too late. This ultimately resulted in the break staying just clear of a rapidly charging peleton coming into the finish.

For myself I found what I thought was a good wheel to follow into the finish, unfortunately the wheel I had borrowed from Maties resulted in me being a bit under geared as we came into the downhill sprint. I wasn’t able to do much but watch as I spun out as everyone accelerated around me. I finished in 14th on the day and around 10th in the bunch kick. 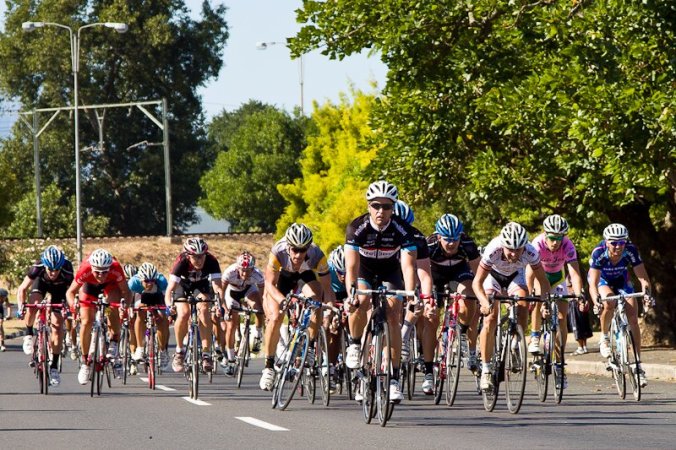 Trying to mix it up with the sprinters.