The Stellenbosch mountain bike race is a popular one across the Cape with four distances on offer to suite riders of all levels. It is also the ‘local’ race for all the Stellenbosch mountain bikers, myself included and hence quite an important one on the calendar. Usually the race is a tough 60km course but this year the organisers included a 75km invitation only marathon which quite excited me. The old 60km course was tough, but this tougher… with the total ascent cumulating to 2100 vertical metres! The course also offers superb single track, most of which is out of bounds for the year due to it being on private property.

Arriving on the start line on Saturday morning a more competitive field had lined up than what I had expected. Renay Groustra was there along with Erik Kleinhans and the whole GT/Mr Price team. As  was David George (SAfindit), the Fairbain and Blend properties teams as well as a few strong individuals. The pace warmed up straight away as we hit the first climb not two kilometres into the race. Things split up quickly and I found myself a bit further back than I would have liked in a group around 20th position. Guys were pushing the pace hard but I think most weren’t quite sure what awaited them.

I settled into my own race after about 20km riding now on my own, maintaining a steady tempo and settling into a rhythm. 50km in after riding some awesome single track my legs started to come around and I soon started catching guys who had gone hard at the start. I managed to catch and drop four guys in the single track going through Delvera. I knew that I would need as much time on them as possible as the climb towards the finish would be a real sting in the tail. Hitting the last climb I was still ahead of the four guys but near the top Kent Horner caught and passed me. I tried to limit the damage as I thought I would be able to catch him on the downhill and single track through town to the finish but this was not to be. The single track was clogged with riders from the shorter distance and my cries of “Track Please” seemed to fall on deaf ears, which was extremely frustrating and something the organisers need to have a look at next year.

In the end I finished in 12th position 10 seconds down on Kent. I was hoping for a top 10 but was satisfied with my result considering the competitive nature of the field. I also managed to get the rear shock on the Cube better set up and had no trouble with pedal bob but still enjoyed the benefits of a full suss bike on the rough stuff. All in all a good weekend but unfortunately no wine fest this year for us to enjoy afterwards!

Thanks to Jandre for the image, check out his site, the link is on my blog roll. 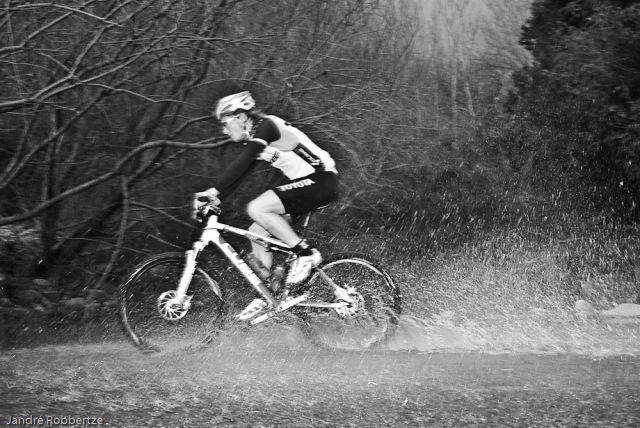